First outing with the Zeiss Ikoflex. A beutiful medium format TLR camera. It’s strange and wonderfull, and I even took some images. 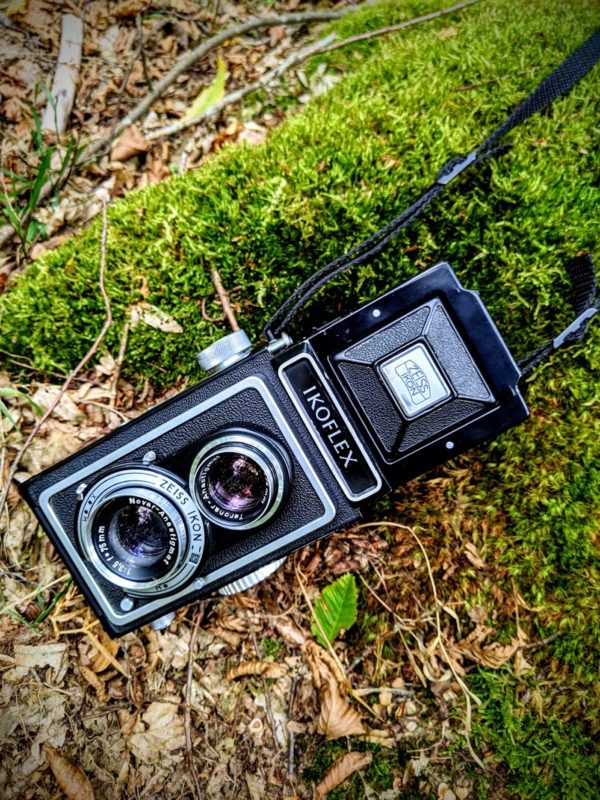 There it was this beautiful Rolleiflex at a reasonable price. The auction was set to end in a couple of days. I put in an auto-bid for the camera, thinking someone will surely soon overbid me. But no one did, for days! The auction was only a couple of minutes away from closing, and I still held the high bid. Then at the very last minute the price skyrocket with about €300, and I had lost the camera. In the end, it sold for around €750 a bit to steep for my wallet. But, the idea of a medium-format TLR had entered my mind, and now I wanted one! After researching the Rolleiflex, I concluded it might be a bit too expensive as a first try into TLRs. On the same auction-site, there was a Zeiss Ikoflex up for bids. I did some research and placed a bid, ending up winning the auction. I had bought myself a beautiful Zeiss Ikoflex Ia for around €170.

I haven’t shot film for about 15 years, and I’ve never shot medium format. But me being me I jumped in wholeheartedly. I bought a couple of film rolls, a kit for colour- and a black n’ white- development, a scanner, and even a binder to store my negatives. Everything you need and then some. Did I mention I’ve never shot medium format? And here I am €500–800 invested in film photography! Oh well, I like to give things a proper shot.

Time to do some shooting! First on the agenda. Loading film in the camera, how hard can it be? Well, the Ikoflex is a beautiful, strangely over-engineered piece of 50s technology. Luckily the camera came with its original manual, and I read through it carefully. Paying extra attention to the chapter about loading the film. Somehow I managed to load my roll of Portra 120, only wasting three frames. But still, nine frames is plenty.

Why Kodak Portra 120?
Because it renders incredible soft and beautiful colours, giving that proper film look. To be honest, it was the only 120-film available at the local camera store, but it is a beautiful film-stock.

Time to photograph something. With some help from the wonders of the internet, I had managed to find a new location to visit. As a bonus, the sky even looked rather pretty that afternoon.
The start of the walk was through two rather large farm fields. To the left overlooking the ocean and a small island, with the sun still quite high in the sky, but softened by the clouds. It all looked pretty.

Time for the first photograph of the day. Taking a meter reading using an app on my phone, f/11 gave me a shutter speed of ~1/100. Easy to handhold, perfect!
I walked along the pathway to find the best composition. Trying to get slightly higher so that I could separate the island from the coastline, while still keeping it in the centre of the frame. I managed decently, and I do like the resulting image — the best of the day. However, the trees on the right intersecting slightly with the island bother me slightly. But at the same time, I like how they add a sense of scale to the image. I took only one exposure of the scene, not wasting film. Luckily not the hardest scene to focus.

A lovely walk continued around the fields down towards the cliffy coastline. Wonderfull surroundings. But only having eight frames left, I was a bit conservative with what I photographed. Halfway through the short walk, I only exposed three frames. It dawned upon me how many frames nine really are. I’m happy if I can get three images on an outing with my digital camera. The difference now is I didn’t want to waste film on mediocre shoots. Walking around and finding nine good landscape compositions in a short walk is hard, if not impossible. I did loosen up a bit and started to shoot more.

After taking a few sub-par images, the walk and the film were nearing its end. There on the hill-side, it was, the lone tree! The most classic of all compositions. Easy to photograph and it usually looks nice. The trick with photographing the lone tree is to keep the background clean and separate the tree. It’s a lone tree after all. I decided to walk down-hill, making sure that the hill-line didn’t intersect with the tree-top. Also making sure there was sufficient space around the tree. I carefully lined up a composition. I cocked the shutter and pressed the shutter-release. Feeling quite comfortable that it would turn out nice enough.

The last photograph of the day is clear second for the day. However, I did forget one thing. The Ikoflex is a TLR-camera. The focusing lens is separate from the taking lens, which means you see an image slightly higher than the actual picture. Even though I took great care to give the tree adequate clearance all around, you still see some bushes, down at the right, creeping a bit to close to the tree itself.

My first experience with the Ikoflex made me think about two things.

How about the Rolleiflex? I coulden’t recist, and have since bought a Rolleiflex on auction as well. Of course you need two TLR cameras!