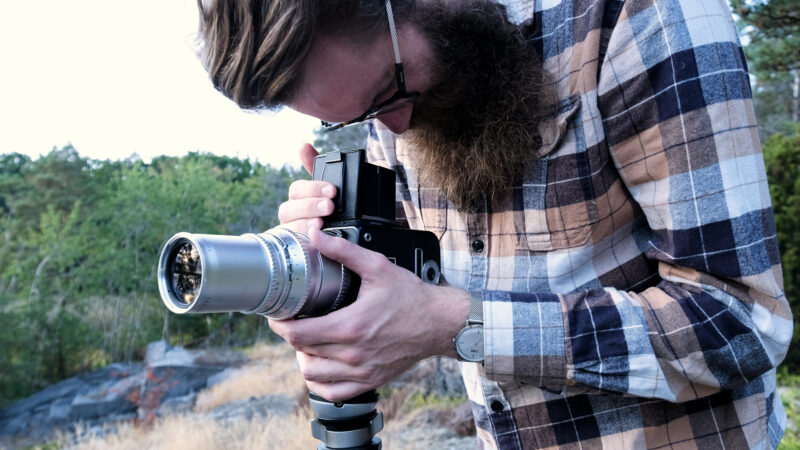 I run a Youtube channel called, you guessed it, ThatBeardedGuy.Photography .
This is a companion post for one of the videos, where we look a bit deeper into the photos from the video. If you haven’t seen it, you can find it here, it’s also embedded at the bottom of this post.

A new outlook on life! Or at least a new outlook in the camera.
Finally a new lens for my Hasselblad 2003 FCW, and I opted for a C-lens. The madness!
Anyhow, it is a rather lovely lens. Often toted as the worst of the Hasselblad lenses. All I can say if this is their worst I’m looking forward to seeing their best. It is probably my second sharpest lens for my analogue cameras, trumped by the Hasselblad 80 mm (f-lens). There might be some truth to that statement then.

I’m not going to dwell to much about the lens here. Instead I thought I would share some thoughts about the images from the video.

First couple of frames, I don’t know what’s going on here?
It looks weird, some kind of hase going on. When I first saw it I thought that I might have forgotten to remove the clear leans-cap that came with the lens. But no, I have a youtube video that shows it’s removed. Maybe the sun hit the lens in a weird way? I don’t know. I did take a couple of exposures of this scene to test out both the leaf shutter and the focal plane shutter in the camera with the lens. Pretty much all of the frames of this scene were the same, so I do suspect some weird angle of the sun or something. I have shot with the lens more since, and it’s worked flawlessly.

Birches! I do love myself some birches. As I’ve started focusing on black and white photography they have become a favourite tree of mine. A bunch of birches against a darker woodland, it’s a simple formula, but it works. As always easy to learn hard to master. Being such a simple subject and composition, the details become increasingly important.
This image was helped and almost defeated by the afternoon sun. The strong side light made the birches pop out from the background in a nice way. However, if you look closely there is a hot spot on the right tree. This bothers me, and now that I pointed it out it properly bothers you too. It is a shame, without it I do think this image might have been portfolio-worthy. Not that I’ve updated my portfolio in ages, and I would rate this image higher than most of the images in my current portfolio. That reminds me, I should update my portfolio.

I did print this image in my darkroom, and the darkroom print is much better. It was also this print that made me start taking notes in the darkroom. I didn’t for this image, and therefore I have no idea how I went about and printed it. Not that it matters anymore, as I got a new enlarger since then. I might try and replicate it with the new enlarger in the future. For now, it’s a very limited edition print, one of one in existence!
Also note that the darkroom print is actually the right way, for some reason I always manage to put in my negatives the wrong way in the scanner but not my enlarger. I do prefer this particular image the right way around.

Focus focus focus! Even though the 250 mm lens has a lovely focusing ring that turns 360 degrees, it’s still not easy nailing focus on medium format and using the waist level finder. In this image, I did miss focus slightly. In retrospect, I could have used a smaller aperture as well. As the leaves are in focus but not the trunk of the tree. I also envisioned it to include more of the foreground leaves, framing the image. That didn’t really happen. To top it off the image is slightly overexposed, but then again the bright sunlight was incredibly hard to measure and get correct. As it stands I think the composition is a decent try, and the execution lacking. The slight overexposure doesn’t bother me as much, but the soft focus is inexcusable. Luckily it would have been a nice photo in the best conditions, never great.

The image that was left out of the video.

Birches again. I suppose I felt it in the field. This was never going to be a great image, and it wasn’t. I do like the ferns and the slightly irregular distribution of trees in the image. There’s something to how the trees are spread out that is slightly irritating to my eye and in a good way. It makes me look. But that overlap of the two trees in the middle ruins it for me. Either they should have overlapped or not at all, now they just touch slightly. I wonder if it’s what bothers me, and if so is it what makes the image?
The overexposure sure doesn’t help, once again the sun was tricky that day.