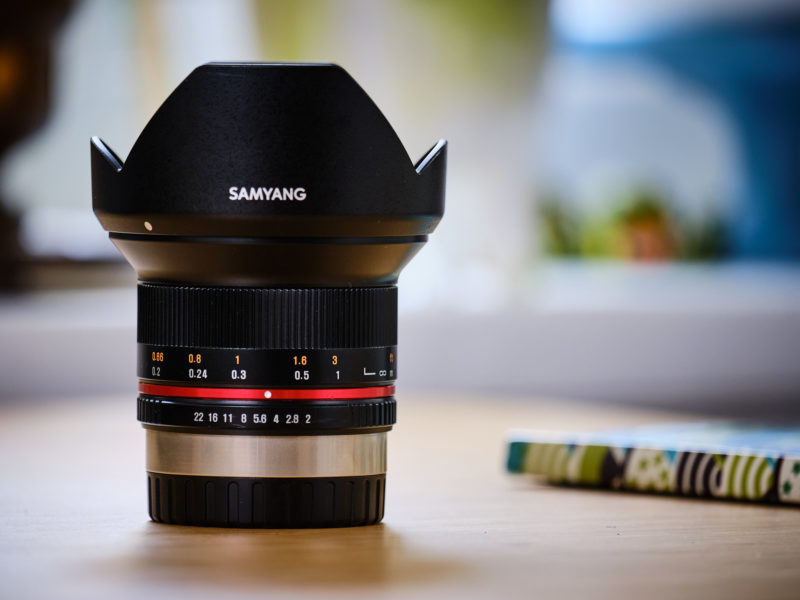 It’s tiny, it’s fast, and it’s cheap. Samyang is well known for making affordable lenses that punch way over its price point. Also known as Rokinon in some places of the world. I prefer Samyang lenses over Rokinon, solely based on that the name sounds better to my ears.

This is a short review of my Samyang 12 mm f/2.
I’m going to summarize this for you right of the bat. This lens is good enough and kept its place in my camera for over two years.
I’m know going to tell you about my experience with this lens. It will not be a technical review. Those are just a googling away. Instead, this is what you would call a real-life review.

First, a short overview of the lens.

Samyang 12 mm f/2 is just that, a wide-angle fast prime lens that’s manual focus only. Designed for APS-C and available in multiple mounts. Personly I’ve been using the Fuji X-version, mounted to my FujiFilm X-T20 or X-H1.

Is it any good?

It’s more than okay. It’s reasonably sharp at all apertures. Wide-open it’s a tad soft at the corner, but it’s decent enough. At around f/4, it’s more or less sharp throughout the frame.

How about its size?

Small, light and well-balanced even on small cameras. An excellent companion for the X-T20 or similar sized cameras.
The spec sheet says it ways 0.41 Kilograms and measures
7.3 x 7.3 x 5.9 centimetres.
It’s small, let’s just leave it at that.
A quirk of the lens is that it has a lip at the top. Looks somewhat funny, doesn’t impact performance, but the lens did get stuck on the lip a couple of times in my bag.

My story with the lens

I bought this lens as one of my very first purchases when I switched over from Sony A7 II to Fujifilm. I made the switch after I had most of my gear stolen. As I’ve been intrigued by the Fujifilm system, I decided to try it out this time around. I bought myself a FujiFilm X-T20 with the kit-lens. I was new to the system I wanted to dip my toes before fully committing to the system. I, therefore, bought the Samyang 12 mm to cover the wide-angle on the cheap. It was only a placeholder for the Fuji 10–24 mm wide-angle zoom that I wanted, but at around €1000 it was a bit to steep for me at the time.
The plan was to replace the Samyang after about a year, and here we are more than two years later, and I still have the Samyang. How come it stuck?

A year into my Fujifilm venture, I had bought what I consider the necessary lenses for what I do. I had some money saved up and instead of buying the Fuji 10–24 mm I went out and bought the similar priced 56 mm f/1.2. I didn’t need that lens. I just wanted it. The Samyang had done its job that good that I was buying fun lenses before its replacement. That says a lot about this little lens.

Why did I keep the lens?

It’s in the title it was decent enough. It’s not the best, but it produces images that I’m more than happy with. I feel that gear comes in two forms.
Necessity and fun.

Some gear you buy out of necessity. You need the equipment to complete a job or to take a certain kind of images.
Some gear you buy purely because you want it. Things that you don’t need, but its fun to try out. Nothing wrong with that, I’ve done it myself.

It’s an excellent lens. It feels well built. It has a nice aperture-ring and wonderful focus-ring. However the later is a double-edged sword. The focus-ring is quite firm, which makes it lovely for small adjustments and precise focusing. However, when you want to change focus quickly, it’s a tad too firm.

Manually focusing is something you get used to. And when we’re talking 12 mm, almost everything is in focus regardless, which can be a bit tricky in low-light situations when you’re shooting at f/2 and try to focus. My cameras focus peaking gets thrown by the small changes in focus. Therefore it’s easy that you end up with photos where stuff is just slightly out of focus. In my experience, this is only a problem wide-open if you step down to it’s hard to miss focus.

Short technical side-note. This is due to the hyperfocal distance (basically when everything is in focus). At f/5.6 the hyperfocal distance is 1.35 m.
However, the depth of field (where things are reasonably sharp) for a subject at 1 m from the camera is 3.18 m, 42.3 cm in front of subject and 2.75m behind subject. In other words, you don’t have to be super precise with focus.
Want to play around with this just google DoF Calculator.

Another side-note for Capture One users. There’s no lens-profile for the Samyang 12 mm in the software, I’ve used the profile for the Zeiss 12mm f/2.8 which has worked out fine for me.

Why I bought a replacement, finally?

I did buy the FujiFilm 10–24 mm f/4 after just over two years with the Samyang. What made me replace the lens?
Lack of zoom and to some extent, autofocus. As I started photographing more landscapes again (which I have written an article about), I’ve found myself in a few situations where I miss the ability to zoom. When your out shooting landscapes, you aren’t always able to move where you want to. Often I just cropped in some in my postprocessing, and for the most parts, that’s fine. And I still use the kit-zoom which is 18–55 mm. In other words, I could crop in some on the photos taken with the Samyang, and if I needed to get closer, I switched lenses. The latter part is the real reason for the 10–24 mm. I often avoided the Samyang as I rarely want to be as wide as 12 mm in my landscape shots. So instead I had the kit-lens and zoomed all the way out, and instead of taking out the Samyang from my bag, I settled for 18 mm.
With the 10–24 mm, I can zoom in instead. So if I see a wide-angle shot I know, I can capture it with that lens. Therefore I actually use it.

Should you buy this lens?

If you want a wide-angle lens, I always recommend this as a starter. Even if you have the money for the wide-angle zoom, this Samyang is a lovely little lens, and it’s cheap. For the price and performance, you can’t go wrong.

There are a couple. I’m going to speak from a FujiFilm perspective here.

Zeiss 12 mm f/2.8, which I haven’t tried. It adds autofocus, however, is almost one stop slower. To me, it sounds a tad expensive for what it is.

Finally, there are two zoom-lenses from FujiFilm.
Fujifilm 10–24 mm f/4, the one I bought. Lovely lens. Slightly larger than the kit-lens. But it’s sharp, and it zooms, and it has autofocus if you care about that.

FujiFilm 8–16 mm f/2.8.
This is a lens you buy when you want the best and nothing but the best. Its heavy lacks filter ring and one of the most expensive lenses for the Fuji X-system. Only buy this lens if you need it, or just want it and have the cash laying around.

That’s my short review of the lens I just almost retired, hope you enjoyed it.
I don’t usually write about gear. I think its more important to talk about how you use the equipment and where to find inspiration. But the equipment is important, and I often look at other real-life reviews of gear.

I’ll send you off with a couple of images taken with the Samyang 12 mm f/2.

All images in this article are by myself. I’m no product photographer, but it was fun to try out.